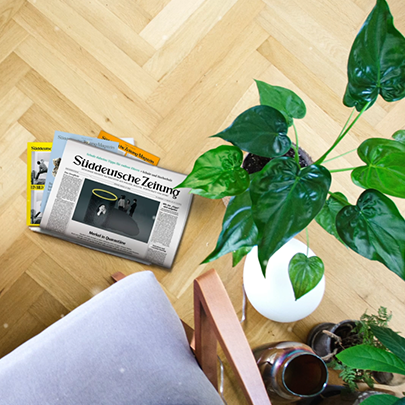 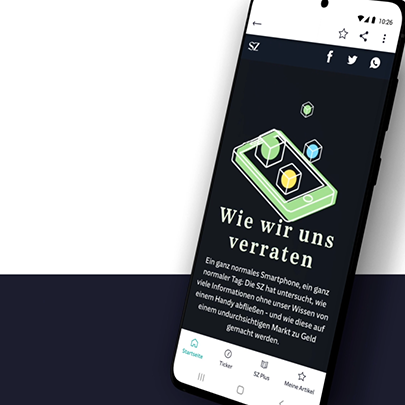 In 2015, the Süddeutsche Zeitung carried out a comprehensive revision of its online presence, with the website being divided into three areas: SZ.de (news portal), newspaper (complete printed newspaper as a digital edition) and magazine (online portal of the SZ Magazine).

Since then, the number of users has increased almost steadily and reached a new record of 110 million visitors to your website between 2020 and 2021. In the course of digitization, the Süddeutsche Zeitung quickly took the initiative to use digital media and was very successful with it.

The three areas of news portal, newspaper and magazine were combined in two apps for smartphones and tablets about 5 years ago: The SZ-News App an the Süddeutsche Newspaper App (the digital edition of the newspaper). These two apps are available both in the AppStore for iOS and in the Google PlayStore for Android.

The Süddeutsche Zeitung approached us with the request to develop teasers for the two app stores from Apple and Google for both the SZ-Nachrichten app and the Süddeutsche Zeitung app. Such app teasers appear when browsing the respective stores directly and via autoplay in the preview and immediately draw attention to themselves through the moving image. A simple but effective method to stand out professionally from other apps.

One teaser - many formats! The right variant for every app store!

The two stores from Apple and Google differ in one important point: where the Apple AppStore uses portrait format, the Google PlayStore works with landscape format. That means the teaser has to be created in two different versions.

Our approach: We always have both variants in view during development and can therefore create two completely equivalent versions - individually adapted and optimized for both formats.

We also animated a cinema commercial for the Süddeutsche Zeitung's campaign "Mut Entscheidet", launched in 2020. More info is available upon request HERE.

We are there for you!

Do you have an app and want to stand out from the competition with the help of app teasers in the app stores? You need UI-animations for prototypes, trade fairs or presentations? Or do you just have questions about animated videos? Then feel free to contact us! Just give us a call (also via WhatsApp) or use our contact form, we look forward to hearing from you!

Venice After Dark - an interactive novel-adventure